Wayne plays fun-filled and interactive music shows for children and families at your house or anywhere you choose with his guitar, banjo, ukulele, and harmonica. He brings rhythm instruments, scarves, and other props for the kids to use too. New and classic songs and musical games include dancing, jumping, movement and sing-a-longs, and he takes requests!

Birthday and House Parties with Wayne

"I hired Wayne to entertain at my twin boys' 4th birthday party.  He was fantastic from start to finish.  He responded to my email inquiries quickly and professionally and even offered to learn a few new songs if my boys had favorites that he didn't know.  At the party itself, we couldn't have asked for a better children's entertainer.  He has a low-key, laid back, friendly personality that draws in even the shyer kids.  He's an excellent musician - skilled guitar player, nice singing voice, wide-ranging repertoire of traditional and original children's songs - but more importantly, he really knew how to read and respond to the kids at the party.  He struck the perfect balance between energetic songs and games that got the kids up, dancing, moving around, tossing beanbags, etc. and quieter songs that helped them settle down.  He kept everyone's attention (parents included!) for the full 45-minute show and the time really flew by - no-one seemed uninterested for a second. We gave out CDs as party favors and kept one for ourselves - the boys ask to listen to it almost every day and frequently pretend to "be Wayne" as they sing and play their toy guitars.  I highly recommend Wayne as a children's entertainer - and in fact will probably ask him to return for next year's party as well!" Review from YELP

Special CD pricing is available if you would like to give CDs as party favors. 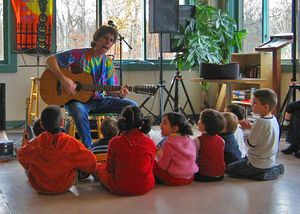 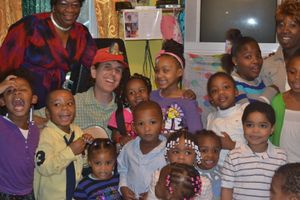 More Parent Reviews
"Just a short note to let you know that you were simply wonderful at Brett's party on Saturday. Another mom and I were commenting the kids are like "Wayne groupies" - they are so enraptured when you sing, and I think a lot of the parents are too! Your ability to excite them and keep them interested is uncanny. I'm in awe, truly! Just wanted you to know how many people told me how great you were. Thanks again for creating such a special time for Brett and singing all his favorites."

"Again, huge THANK YOU for making (my daughter's) birthday party so much fun.  You made the day so enjoyable and fun for the kids.  I am so grateful that I had a chance to just relax and enjoy the party since you kept things moving and kept everyone happy and engaged.  So many happy memories from that day - thanks again for making it so extra special.  (My daughter) was thrilled, and my 2 1/2 year old was asking all day Sunday when you were coming back to play for us.

Lots of great feedback from parents who were totally impressed by the job you did - it's not easy to keep that many wiggly bodies seated and happy for 50 minutes, so hats off to you - it's a real talent.
Looking forward to crossing paths again at your concerts - and we'll be sure to get your new CD when it comes out.
Thanks again to you, Wayne.  Keep up the great work!"