“Wayne is one of the hardest working guys in the business-he’s got shows all over town! And all that hard work really shines through in his polished and refined concerts,"  BostonChildrensMusic.com.

Booklist says “Potash knows his young audience, and his music mirrors their likes and stirs their enthusiasms.”

Wayne's super-fun solo and band performances for young audiences are interactive and high energy. He plays all over New England at schools, festivals, libraries, parks, museums, clubs, and theaters. He does Music Fun Birthday Parties as well as ongoing Music And Movement School Programs. With over thirty years of experience, Wayne has released eight award winning albums for children! As a Berklee College of Music graduate, his musicianship is totally professional.

"I cannot say enough good things about Wayne Potash. He is wonderful to work with, he does a great job engaging the kids, and he is prompt and accommodating. If you want a class act that can connect with the kids and entertain parents at the same time, he's your guy! "5 star rating" GigSalad Review

"THANK YOU for engaging so enthusiastically with our students - I was so worried about covering (for the head of our elementary school music department for five months). What a blessing you have been!" Principal, Randolph Public Schools

"Wayne played for my son's fourth birthday party. He was awesome. Really engaged with the children. They had so much fun. It was a nice day, so he played outside. Had the kids running around! It was so much fun!! Highly recommend Wayne." Yelp Review

"Thank you a million times over for the show at our house today. It was exactly what I'd hoped for - actually the kids were more engaged than I expected! I would hire you again in a heartbeat. Thanks again!!" Parent Review 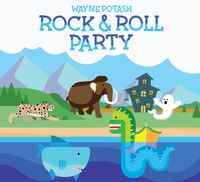